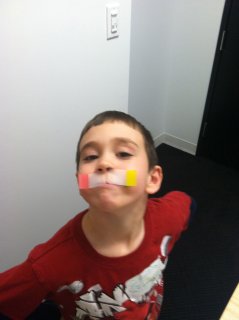 Ah, school vacation week. Never a dull moment when you have to work, but the kids have to stay home. We survived, though. A trip down to VA to see the new nephew, a day working from home, a day with the babysitter who is also off from school and lastly a day at work with dad. I cannot sing the praises of Bright Horizons enough. Best benefit any of my firms have offered.

The boys had a blast at the Center that day. They built rocket ships, they made popcorn (three flavors! taco, cheese and cinnamon-sugar) and generally had a great time. I took them out to lunch, which is always a treat (at least for me). I get to spend extra time with them on a workday and have a reason to not eat lunch at my desk.

A treat for them (besides the fact that they usually find pizza in the cafeteria) is coming back to my office. Dad has a white board to draw on (never mind the stuff he already has written there), dad has a speaker phone to call mom and, of course, dad has office supplies. Post-its are the favorite on most trips. This time another 3M product stole the show. The Post-It tape flag.

Did you know that you could make a mustache out of these things? I had never thought of it, but as the picture shows, you can make a fine two-tone ‘stache out of these things. C proceeded to wear his for the next 20 minutes as we walked around my office and back to the Children’s Center. The looks I got from my colleagues were withering, but C was not to be bothered.

M: C, are you going to wear those all day?
C: Yeah, I like it.
M: (moves in close to C’s face) You know you have some real hair there?
C: Yup. (he begins to stroke his tape flags)
M: No, really, you have some hair above your lip.
Me: That’s called peach fuzz.
C: (Deadpan) No, dad, that’s called a quality ‘stache.