As you may recall, we have a skeptic in our midst. But, for some reason, the Easter Bunny and the Tooth Fairy are sacrosanct. This has been relatively enforced by our older brother. Recently, M has been losing his teeth. The second tooth quickly followed the first and we have a third wiggly one now.

We had a brief bout of doubt with her divine Fairyness, however. We have always left the boys some kind of gift from the Fairy, rather than money, usually some toy or something similar. On the second tooth, however, the Fair left us a Transformer. My call, it was purchased late at night at CVS when I received a text on my way home that the second tooth had made its exit. It was a disaster. Even I couldn’t figure out the instructions and it just seemed to be made wrong. M hated it and his faith in the Tooth Fairy was shaken.

C sprang into action. Below is his diagram of what the Tooth Fairy really looks like, and what she carries with her. I love the creativity and M was greatly impressed with his brother’s knowledge. 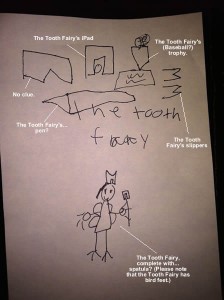