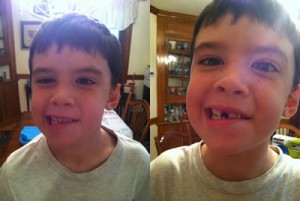 We have entered into a new realm here tonight. M is now officially losing his baby teeth. Seen above is the last picture he’ll have for a few years with all his teeth in place.

He is ecstatic. He has had “wiggly teeth” for a few weeks now and has been asking several times a day if they were ready to come out. Until tonight, it was safe to say no, but the wiggles became dangles and out it had to come. I got to do the “honors” of pulling it all the way out. He then did a dance, called both sets of grandparents to share his news and promptly ran upstairs to get into his pajamas. All this two hours before bed time.

So, it is our fervent hope that the tooth fairy will come tonight. Our tooth is safely wrapped in a bag and tucked deep inside our pillow case so it can’t get lost. Therein lies the problem.

We have two distinct sleeping styles in our bunks upstairs. There’s C who slips into mild comas and can barely be raised by bodily moving him out of bed. And then there’s M, the boy who wakes up if a good breeze blows past him. (This is, of course, a selective ability and does not work on school days or when we have fallen asleep on the couch.)

So, our mission for tonight is to recover his tooth and replace it with a gift from the tooth fairy. I am not sure how this is going to be accomplished. M generally does not sleep on, or anywhere near, his pillow (unless his feet are resting on it). But, tonight he has his pillow firmly in his grasp and I imagine something along the lines of a mission impossible repelling ensemble being needed. Sadly, I cannot get the image of Dwayne Johnson, dangling in IM Force gear above my sons’ bed, out of my head.

Now we begin the stage that C is currently in, when your adult teeth take up twice as much space as the teeth you lost… 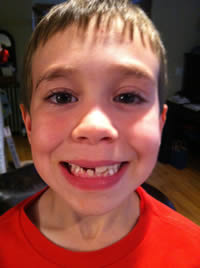