So, the holidays can be stressful, no? The family, the cooking, traveling, trips to the ER… Yeah.

We headed down to Virginia for the week. K’s family was hosting and K was going to do the cooking for Thanksgiving. We drove down, made a stop in NJ to visit the great-grandparents and had a great trip overall. Got to VA on Sunday, had some fun and finally rallied the boys for showers before bed.

C was really excited about the shampoo his grandmother had and was singing its praises loudly. I stepped into the bathroom to remind him that he had to actually use the shampoo as well (and to be the mean guy who says dancing in the shower is bad). He promised and I stepped out of the bathroom. Then the thud and the screaming began.

He swears he was no longer dancing and just slipped, but whatever he was doing, it ended with him bringing his head down on the corner of the shower bar. I thought he had just bumped his head until I saw the blood. It wasn’t a big cut, but looked pretty deep. In some super-human series of moves, K and I got him dried, dressed and into the car and we were on our way to the ER.

We got triaged, the blood pressure cuff hurt our arm, and we had to rethink the pain scale. 0-10? No, not for a 7 year old, really. Would you go outside and play? No. Could you play Wii? Oh, yeah. Okay, we’re about a 3.

We get taken back to the treatment area and now the fun begins. We have a big bed, heated blankets, we have a remote control for the TV that only C is allowed to touch (although his father may have convinced him to push the button that said ‘light.’ How was I supposed to know it would call the nurse’s station?). 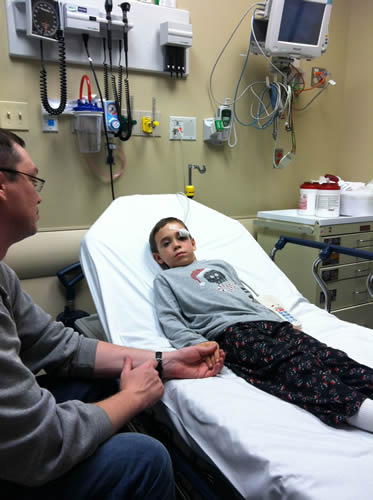 Thankfully, we had a great PA and no stitches were necessary. Some irrigation, some dermabond (such a fancy name for superglue…) and we were all set.

Once we knew he was fine, the nagging thoughts started coming. Here we are, in the ER. My son is missing teeth. Has a laceration above his eye. If anyone lifts up his pants leg he’ll be covered in bruises. So, how long until DSS comes for me? I mean, the kid looks like Rocky Balboa… 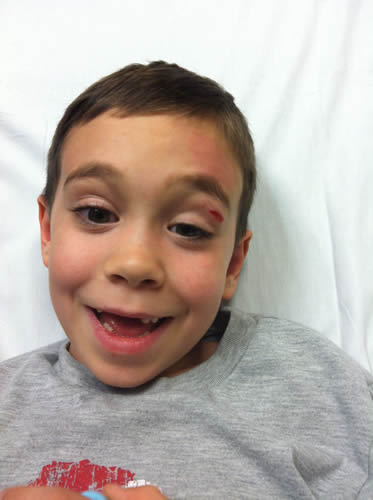 Thankfully, no one else seemed to have thought about this. They did give him a prescription for tylenol with codeine, which I thought was a bit much, but he never needed more than regular tylenol that night to sleep.

So, we survived the night. Our first trip to the ER for either boy. A seven year streak that I think we can be proud of. I think we each have a few more grey hairs to show for it, but the rest of the week went great. K cooked a meal for 20 that was out of this world and we’ll just not talk about the drive home.